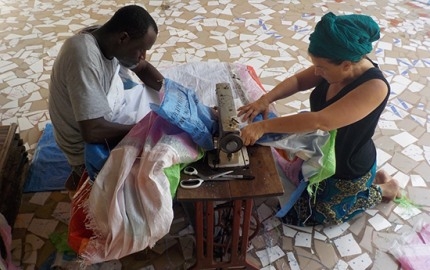 Dana Lynn Louis is a visual artist who makes works that honor the interconnectedness of being and explore the timeless, magical reality of biology in the natural, personal, and constructed worlds we inhabit. Glass, light, drawing, shadow and a variety of other media shape her work, which fluctuates between intimate, domestic-scale pieces, interdisciplinary performance collaborations, and large scale public installations. As a response to tenuous political and environmental climates worldwide, Louis seeks commissions and projects that allow her to imbue spaces with beauty and hope, and open a window into a world of calm contemplation. From intimate objects and drawings to all encompassing environments, Louis creates visual worlds that help us perceive the beauty, levity, and wonder that exist in the natural world and in our own bodies and minds.

Louis brings a social component to her work as well based on her teaching of yoga and her experiences traveling through West Africa and helping to create Ko-Falen, a cultural center in Bamako, Mali. For example, at the Oregon State Hospital, she incorporated her teaching practice into workshops involving writing yoga meditation and beading, which resulted in permanent works for a new hospital. In January 2017, Louis returned from a residency in the remote village of Sinthian in Senegal, West Africa where she introduced yoga and drawing classes and collaborated closely with villagers on several projects.

Louis’ work has been exhibited and collected Internationally. Articles about her work have appeared in such periodicals as Sculpture Magazine, Artweek and the German magazine Glashaus. Lewis and Clark College also published a book on Louis’ work aligned with a major solo exhibition entitled “Clearing” in 2014. Louis has received awards from The Pollack Krasner Foundation, the Regional Arts and Culture Council, the Ford Family Foundation, and the Oregon Arts Commission. Her Artist in residency Awards include: The Museum of Glass in Tacoma Washington, Bullseye Glass Factory, Ohio State University, Oregon College of Art and Craft, Sitka Center for Art and Ecology, and THREAD a project of the Joseph and Anni Albers Foundation in Senegal, West Africa.

Louis has a BA from the University of Wisconsin, Madison in Art and Education, and an MFA from the Ohio State University. She lives in Portland, Oregon. 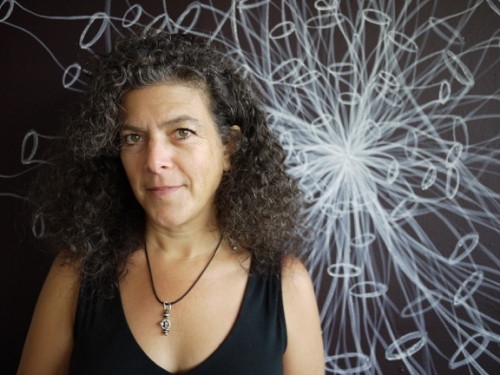 I have been in conversation with the immense and magical Pacific Northwest for 27 years. It is through my intimate engagement with the natural world that I extract the imagery that forms the basis of my drawings, sculptures, photographs, projections, and encompassing installations.

My work is inspired by the timeless and fascinating systems of the body, the natural and constructed world, and their interconnections I am interested in the liminal spaces we inhabit as we live and breathe. I work to engender a feeling of connection to external landscapes and our own internal environments. I encourage viewers to travel to new landscapes within themselves that evoke memories and stimulate hope.

While helping to create the Ko-Falen Cultural Center in Mali, West Africa the Malian people taught me ways of appreciating humanity around the edges of life. I experienced the practices, rituals, and ceremonies that created a bordered and collaborative world in which the people and their natural environment were interconnected. As sensual beings moving through this life we cultivate relationships and forge intersections with each other and nature. I am motivated to visually express these intersections and relationships.

The longer I live, the more I understand that life is precious and ephemeral. By looking at spaces in between, we touch the delicate and fragile places in our lives. However, with the recent war in Mali and continued violence and suffering in our world, my ability to catch my breath and have faith on a cellular level has been challenged.

In 2014 I had the privilege of collaborating with patients at The Oregon State Psychiatric Hospital to create large permanent installations. My installations are created using the physical, mental, and spiritual aspects of both breathing and drawing. The process of living, breathing, writing and drawing alongside the patient-artists was profound. This experience contributed to a fundamental shift in my understanding of humanity’s delicate and interwoven relationships. My experience at the State Hospital and my study and practice of yoga has given me the language and fortitude to use my breath and my whole self to build relationships and works that stimulate levity and encourage humane actions that allow us to live together.

The envelope project in 2014, part of the show Clearing at The Hoffman Gallery at Lewis and Clark College, was inspired by my experience with the patients at the State Hospital. People are longing to actively engage in work that connects them to themselves and each other. When asked the simple question, 'Is there something you would like to clear personally or globally?' the response was a resounding 'yes.' People wrote down the things they wanted cleared in sealed envelopes knowing they would be burned in a ceremony at Lewis and Clark College. The project took on a life of its own: over 3,000 envelopes were collected from more 25 countries. I received batches of envelopes from far-flung places without return addresses. I had no idea that this seemingly small gesture would take on such significance. At the burning on December 9, the event was streamed all over the world after having gotten emails, texts and phone calls from people asking to witness the burn. I was humbled and inspired to continue to draw breath in order to keep connecting myself, and my work to the world we share.

I have long understood how communing with nature and people influences and forms my works. Recent projects have contributed to my global sense of connectedness. I feel that the interconnections and netting that surrounds us empowers us. I imagine that my works are small but significant renderings of netting that like a spider web appears delicate but gets strength from tension. Like all natural forces I cannot predict where this will take me but I am attempting to make a record of the journey. 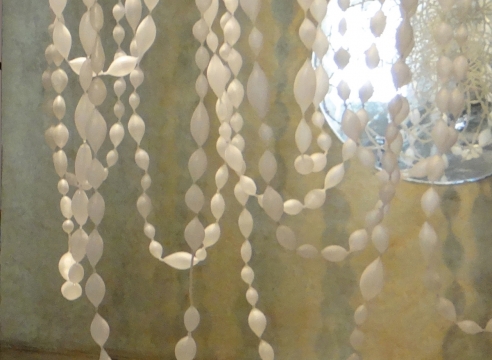 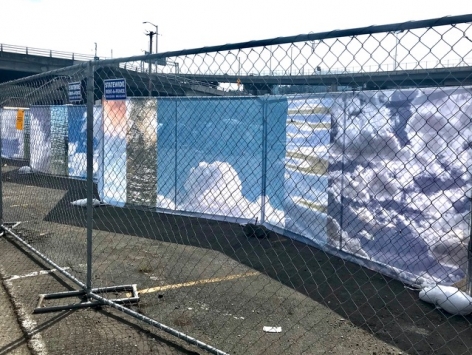 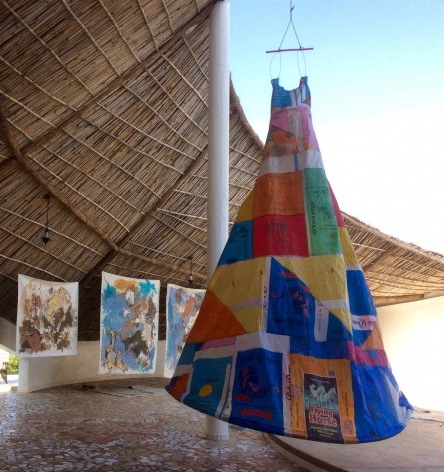 Joseph Gallivan interviews artist Dana Lynn Louis about La Grande Robe, her installation at Front of House Gallery. The installation of two large dresses made from plastic rice sacks in Senegal comes with many stories behind them from Louis’s trip to Africa a year ago.

Says Louis, 'With La Grande Robe, my intention is for people around the world see this installation and appreciate the powerful, beautiful, creative women of Senegal, their work and, primarily, their humanity.' 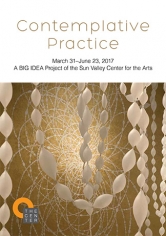 What is the connection between art and contemplation? For centuries artists have created religious objects meant to offer a contemplative or devotional experience. But how do art and contemplation intersect outside established religious traditions? This BIG IDEA project at The Center in Ketchum uses work by artists engaged with contemplative practices as the basis for a larger investigation of the role of meditation and mindfulness in our world today. Featuring the work by artists Dana Lynn Louis, Pegan Brooke, Meg Hitchcock and Serra Victoria Bothwell Fels. 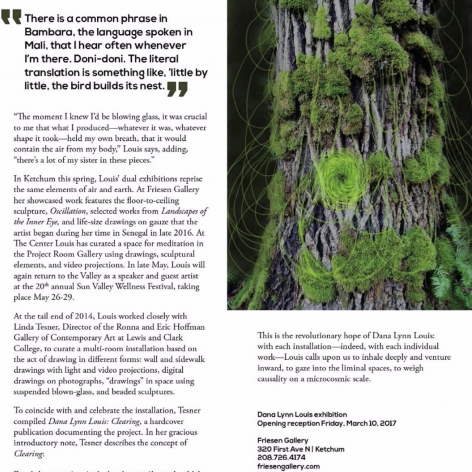 If ever there was an artist with revolutionary tenacity, it would be the multitalented painter, printmaker, photographer and activist, Dana Lynn Louis.
Louis, whose interdisciplinary work to-date has spanned both small- and large-scale installations have called upon all manner of media––among them drawing, painting, photography, sculpture, glass-blowing and video projection––is the newest addition to the roster of impressive contemporary artists at Friesen Gallery. This March, Louis makes her Sun Valley début in simultaneous installations at Friesen and The Sun Valley Center for the Arts in Ketchum that examine the correlation between creative output and contemplative practice. . .