Known internationally for her photography, LOVE LETTER is Barbara Vaughn’s debut of two new bodies of work and her love letter to Greece, New York, and Paris. This thought-provoking exhibition presents a bold juxtaposition of real and surreal, and the resulting ambiguity allows viewers to unravel the mystery.

URBAN TABLEAUX
My Waterscape series sprang from time spent in costal environments, where I discovered ever-changing abstract imagery, dancing on the surface of the water.

In city environments, my quest for abstraction led me to unnoticed urban landscapes- gritty walls of layered posters, advertisements, billboards and graffiti, in varying states of deterioration. These pre-exiting tableaux evoke collages, with their torn edges, visible glue, and arbitrary compositions.

The Cubists began the practice of incorporating found materials into their work. The evolution of collage continued with Rauschenberg and Motherwell, and has been most notably explored today by Mark Bradford. While I adore this thought-provoking artistic medium, I did not create the collages in my photographs. I am an urban archeologist seeking and documenting their organic existence and ever-changing conditions.

The works in this series are carefully composed photographs of these environments as I found them. The layers of transformation and glimpses at the past invite our own interpretations and narrative.
–BARBARA VAUGHN

CLASSICS REVISITED
The genesis for the following work stems from my long-standing interest in Classical history, languages, and art. During a visit to a historic estate in the UK, I was given access to the library, where I encountered an enormous tome from 1809 - over two feet high, weighing about forty pounds. I was fascinated not only with its notable age and scale, but with its contents - meticulous engravings cataloging the Classical and Hellenic sculpture in the Museé Francais, the precursor to the Louvre. These extraordinary pre-photography renderings not only documented some of the most beautiful sculptures from antiquity, but they were artwork themselves. I photographed many pages of the engravings, which form the basis for this body of work, and layered additional imagery to expand the narrative for these mythological and historical figures.

Urania, the Muse of Astrology, is pictured with the North and South stars, images from my grandparents’ 1934 Rand McNally Atlas. Ariadne’s pose shows her pining for Theseus, with a faint love letter in the clouds, and the horizon of Naxos, where he deserted her. Ardent lovers Eros (Cupid) and Psyche embrace behind a romantic Greek missive, and a vintage Greek stamp from my collection. Hartographia, the Greek word for cartography, depicts another vintage Atlas image, referencing considerable advancements to that science by the Greeks.

Placing together imagery from different contexts creates a link between past and present cultures, and highlights the role of photography in how we understand history and experience art.
–BARBARA VAUGHN 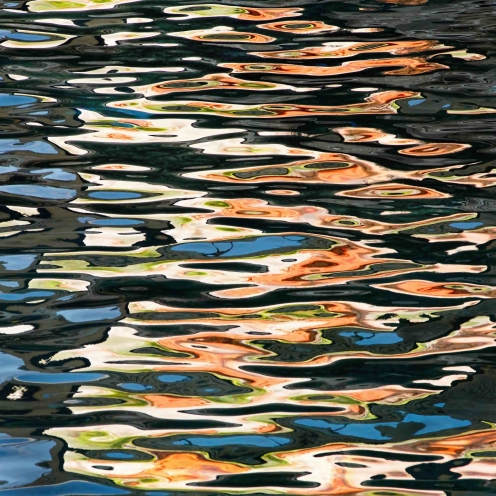 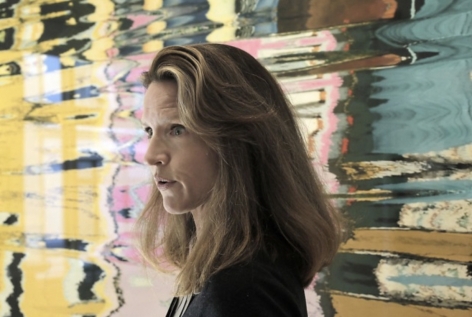 San Francisco photographer Barbara Vaughn had spent decades doing black-and-white portraiture and figurative work. But in 2007, vacationing with her husband on the Greek island of Paros, Vaughn became transfixed by colorful and abstract reflections on water.

"I'd always had a desire to create abstract images, and to get away from the representational world I'd occupied for 20-plus years," said Vaughn, whose photography has been published in books and featured in a range of publications from Vanity Fair and Vogue to Time...