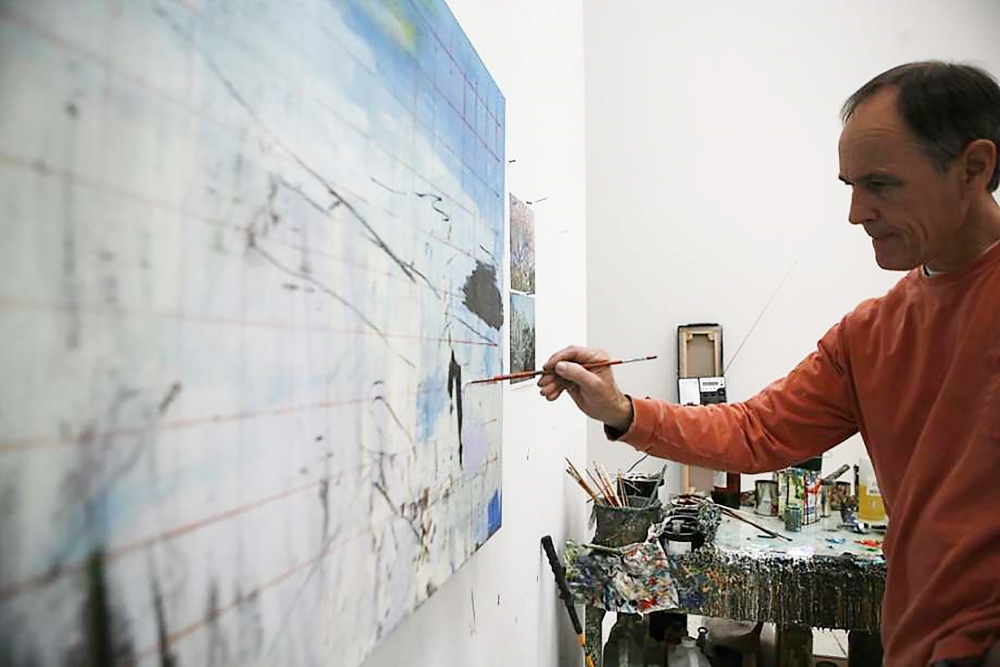 Brown has received NEA grants in both painting and art criticism as well as awards from the American Academy and Institute of Art and Letters, and the Equitable and Rockefeller Foundations. His works are in major collections, including the Museum of Modern Art and the De Young Museums in San Francisco, the Walker Art Center of Minneapolis, the Metropolitan Museum of New York, the Modern Art Museum of Fort Worth, Texas and many private collections. 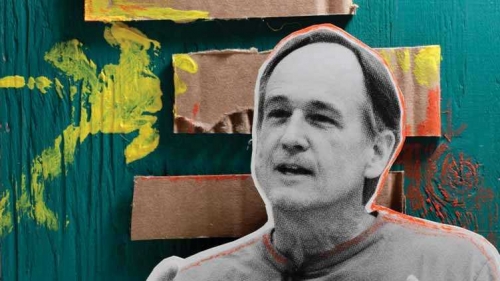 Memory has been an abiding factor in Christopher Brown’s work since he took an interest in painting at the age of four. ‘The experience of painting is an experience of trying to bring up something in me,’ explains the artist, ‘a kind of consciousness, a relationship to the world that’s a visual experience that makes me think of my awareness of the world when I was four and five years old, when I was first interested in art.’

Art historian Michael Brenson has written: ‘[Christopher] Brown is not interested in the essence of an event. He wants to make it possible to feel and consider the ways events are lived and remembered.’ Read Brenson's complete essay, ‘Christopher Brown: History,’ below.

Christopher Brown was born in 1951 in Camp Lejeune, the Marine Corps base in North Carolina, where his father, Bruce, was a doctor. When he was three, his family moved to Ohio, the home state of his parents. They lived in Warren, 50 miles east of Cleveland, in a house with a yard, with all the grandparents nearby. The family was Methodist.  Protestantism “was pretty heavy force in our family,” Brown says. “My grandfather on Mother’s side was a minister. I have uncles who are ministers, cousins. It’s a strong strain on that side of my family. Church was something you did every Sunday. And something I always disliked.”

He had an easy time at school. “In many ways, I was a model student-athlete type of kid,” Brown says. He got good grades, ran cross country, played golf, and was a member of the swimming team. He loved water. In college, he coached swimming; his brother, Peter, is a swimming coach at Penn State. “Water was something I was always around,” Brown says. The dream state he arrives at in his work reflects the slow-moving yet buoyant feel of reality experienced under water. Water is his most recurrent motif. In college, he painted pools.  Since then he has painted ponds and rivers. In the last few years, living near the Pacific, inspired by photographs in the American Red Cross Life Saving and Water Safety Manual, first published in 1937, he has made paintings in which the ocean is as irresistible yet as dangerous, as fluid yet as chaotic, as history and memory. “Water is beautiful and alluring,” Brown says. “It’s one of the most optically beautiful images in the world, but it’s terribly frightening at times, too, and there is this great mystery about it. And, like painting, it’s multi-layered.”

His father’s mother gave him an oil painting set when he was 6 or 7. He got his mother to enroll him in Saturday morning art classes in a neighbor’s home. This interest in art is among his earliest memories. Painting continues to be connected, for him, with the formation and sensation of memory, with that moment in his childhood, the move to Ohio, when harmony was disrupted just as his conceptualization of the world began. “The experience of painting is an experience of trying to bring up something in me, a kind of consciousness, a relationship to the world that’s a visual experience that makes me think of my awareness of the world when I was 4 and 5 years old, when I was first interested in art.”

When Brown was 13 his family moved again, this time to Illinois. His father became the student-health director at the University of Illinois in Champaign-Urbana, where Brown attended college. He majored in painting. “My Midwestern art training was pretty academic, pretty uptight, with skills and prejudices passed on,” he says. The strength of the University of Illinois art department, he says, was the visiting artists program. “I remember going to every talk and every discussion,” he says. “I heard Wayne Thiebaud, H.C. Westerman, Al Held, William Wiley, and Peter Saul. What was the most striking to me was that they were all really different but they were all really intense. There was a kind of conviction about each of them.”

After he graduated in 1973, he went to art school at the University of California at Davis. The faculty included Thiebaud, Wiley, Roy De Forest, Robert Arneson, Manuel Neri and Roland Peterson. “I tried to study art with everybody,” Brown says. It was at Davis that Brown thought seriously about Pop Art, in Great Britain as well as in America, which made the presence and absence of the media image, the tension between its immediacy and yet its distance from us and from the reality to which it refers an ineradicable part of American art.

After the first year at Davis, he took a year off and went to Europe on a grant from the University of Illinois. He spent several months in Spain, visiting the Prado, settling briefly in Malaga. Brown talks often and eloquently about the history of art. He speaks about the use of black by Velazquez, “the dreamlike quality of invention that nonetheless suspends disbelief” in Manet, de Kooning’s and Diebenkorn’s ways of making a painting, the relationship between order and disorder in Francis Bacon and Malcolm Morley, Mondrian’s “way of making disorder coherent and still.”

Brown then went to Munich, where he spent most of the winter. It was there that he became familiar with the work of Gerhard Richter, the German painter who has moved between representation and abstraction in his investigations of the complex relationship between painting and memory. As much as any contemporary artist, Richter has been able to communicate the allure of the historical image and yet the screen between us and it.

Brown returned to Davis, where he was bombarded by theoretical and artistic information and confronted by the difficulty of being a professional artist. It was the first time since he began making art that real doubt set in. “I felt sort of embarrassed to have people come to my studio,” he says. Thiebaud and Wiley “had a lot more faith in my talent than I did at that point.”

What he says he learned most at Davis was an attitude about being an artist that included willingness to risk. From Wiley and Thiebaud, in particular, he picked up the awareness that “you have to believe in yourself and let it get bad and let your fears come true and go beyond them.”

After graduating in 1976, Brown spent five years on the move. First, he moved to Woodland, an old farming community outside of Davis, “in the center of tomato fields.” He taught part-time at American River College in Sacramento. Then in 1978, he moved to San Francisco, where he not only painted but wrote art criticism for Artweek magazine in Oakland. He liked writing about art. It also enabled him to ease his anxieties about being a painter. “I really had serious doubts if I had what it took to be an artist,” he remembers.

Then, with a DAAD (Deutsches Akademisches Austausch Dienst) Fellowship awarded through the Fulbright Program, he went back to Munich for a year. “I was given this great studio at the Academy of Art and was expected to do what I wanted to do,” he says. “It was a phenomenal experience.”

He returned to San Francisco after being awarded the second of two art critic’s grants by the National Endowment for the Arts. “New Bay Area Painting and Sculpture,” a catalogue he wrote with Judith Dunham, was the basis of a traveling California show. He wrote his last article in 1982, the year he painted The Biglin Brothers (After Eakins). “Art criticism really helped me clarify my own thinking as a painter,” he says.

By the time he began teaching in the studio art department of the University of California at Berkeley in 1981, Brown had become increasingly interested in photographs that challenged assumptions about ownership of memory and history. Often, he would research these photographs, if need be in the Library of Congress, and take reproductions of them into his studio at home, where their meanings would germinate in the same setting as his paintings.

In 1980, in Virginia, he came across a photograph of the Gettysburg Address in which Abraham Lincoln was off to one side, enclosed by a crowd that seems at the same time to be coalescing and dispersing; nearly 10 years and much research later, that photograph inspired a series of Civil War paintings in which crowds form and dissolve in dreamlike spaces from which all grand narrators have vanished. Around 1986, Brown began accumulating images of the Kennedy assassination. In the winter of 1993-94, he began actively searching for images of this event. By the time he resigned from Berkley in the spring of 1994, he had begun to explore the possibility of an ambitious series of paintings investigating some of the most instantly recognizable yet most elusive of all photographic images.

For Brown, the Bay Area attitude, articulated by artists he has known like Joan Brown and Elmer Bischoff, means challenging control. It is partly defined by the words ‘loosen up.’ “This was the catch phrase of Bay Area Painters,” he says. “‘Loosening up’ was a physical problem in painting, but it was primarily psychological. It meant letting go of control enough so as to actually discover a deeper, more valuable part of yourself that wasn’t just the ‘good boy,’ right answer, likable, uncriticizable self.” The Bay Area attitude is also defined, for him by “reverence for the iconoclasm of the individual.” To be a Bay Area artist means going your own way and not being sidetracked by careerism identified with New York. “The Bay Area attitude was to forget all that. Just do your work in your studio and that stuff will take care of itself.”